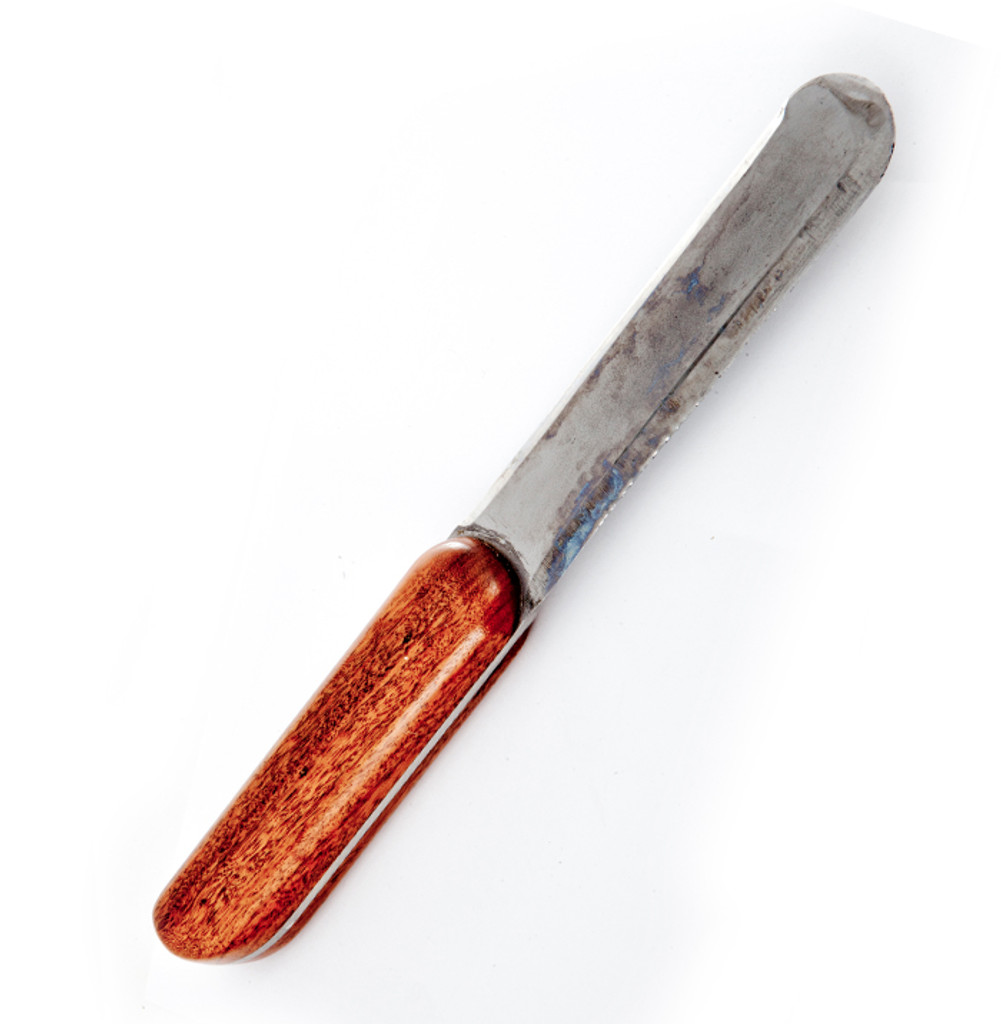 The Coconut Slicing Knife is designed to remove narrow strips of kernel around the edge of the half nut, working inwards to produce a spiral of freed kernel. This page also includes a recipe on how to make your own Coco Fries

The knife is hand-made and has a polished "ironbark" handle of guaranteed longevity. Hold the knife so that the wedge in the blade is on the lower side. Take care not to let the knife slip out of the kernel by holding the handle high and pressing down hard to retain contact of the blade with the shell below the kernel. It is wise to wear a protective glove of the hand that holds the half nut. The small wedge section at one end of the semicircular section of the stainless-steel blade detaches the strip of kernel very effectively from the shell. 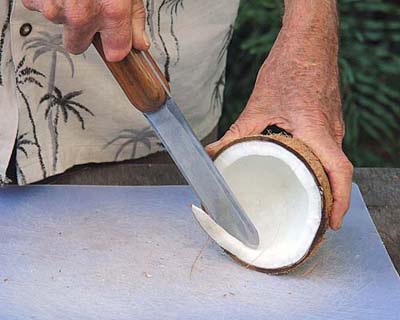 Fresh kernel tastes good and as it contains one third oil this is one way to add coconut oil to your diet. The sliced strips are easy to manage and are convenient to eat fresh or deep fry to give them a longer shelf life, as described below. 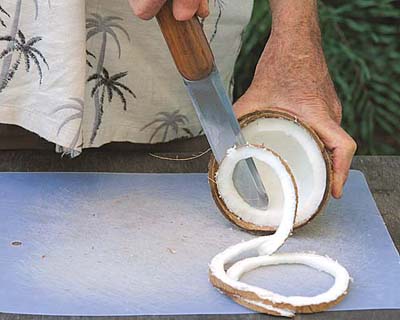 Abstract
A new process is described for processing the kernel of the coconut in order that it may be stored in ambient conditions for convenient dietary and snack use. Deep frying of pre-frozen strips of coconut kernel has yielded a very attractive product that might gain commercial use with adequate characterisation, energetic promotion, and attractive presentation. It appears that this product could compete with other oil-bearing snacks such as peanut, cashed and pecan thereby entering a very lucrative market. Production that involves shareholding by small-holders could provide a much needed boost to income in depressed coconut communities.

Introduction
In the course of the past 160 years the coconut has remained a steady staple in the diet of hundreds of millions of people in the coconut heartlands of Asia and the Pacific while gaining increasing use in Africa, the Caribbean and Latin America. Over that same period, following the “discovery” of coconut oil by European traders in the early 19th century it has enjoyed a roller-coaster ride as a commodity in world trade. The peak of the value of coconut to industrialised populations outside of the tropics extended from the late 19th century, as supplies of whale oil turned down, until the Great Depression of the 1930s. Valiant efforts to revive demand for coconut following World War 2 were stifled but the producers of highly mechanised oil-seed crops – particularly soybean - outside the tropics. The success of carefully crafted messages about the health impact of different chemical forms of oil in depressing demand for coconut is well-known and need not be repeated here.

A relatively recent development, however, drawing on the marketing strategy of the producers of olive oil, - like coconut, another tree-based oil – is the rise of Virgin Coconut Oil in tropical and temperate markets. Although main-stream health professionals have yet to fully embrace VCO it appears to be making significant inroads into the market for health products. The fact that it is regarded almost as a medication, rather than a treat, has dampened its wider adoption beyond the generally health-conscious element in the community, although the price it commands shows that demand is strong.

In order to enter into the market for “recreational” nut foods, such as salted peanut or cashew, I have attempted to develop a derivative of the coconut kernel that is visually attractive, tasty, is nice to chew, and probably retains chemical integrity close to that of VCO. This new product, known for the time being as Cocos Fries, is the subject of this brief note.

Preserving coconut kernel
The most popular coconut product among consumers in industrialised countries is Desiccated Coconut (DC) which is an important ingredient in home-made sweet items and manufactured snack bars. The intensity of the drying of DC, which is important to its extended shelf life, diminishes the coconut flavour to some extent, so that sweetening is commonly added to enhance the taste attraction. Preservative is often used also to protect the shelf life.

By contrast the other great kernel derivative is copra which was the foundation of the trade between the coconut world and clients in temperate countries. Copra was the product of drying kernel, generally without any special attention to hygiene, while concentrating on getting the kernel to the drier as quickly as possible after splitting the nut. Quality varies a great deal depending on how rapidly the drying was done, how dry the material became (ideally 6% moisture meant a stable product) and how long the interval was between drying and delivery to the oil expeller on the other side of the world. In most supply systems the quality of the oil extracted from copra required refinement, especially for the food market.

A new approach to drying the kernel by means of deep frying is based on modified traditional practice found in some parts of Indonesia where the fried product was passed immediately to the expeller. However, this deep-fried :”copra” is very different from that dried in hot air, having an attractive additional flavour due to browning of the surface, and avoiding any significant chemical change in the oil because the process takes little more than one hour at ideal oil temperature. One major change to the traditional method of deep frying has give rise to Cocos Fries which are tasty and have an extended shelf life.

The kernel is sliced from a fresh mature coconut in narrow strips 6 to 8mm wide using a knife similar to those used on some plantations to extract the kernel from split nuts in the field.

The kernel strips are then placed in a freezer until fully frozen. This freezing step makes a great difference to the dryness of the surface of the kernel, which will be explained later. 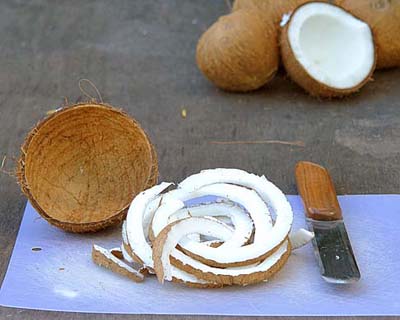 After defrosting and washing the strips are submerged in cooking oil in a saucepan, preferably coconut oil but olive oil is also suitable as would be palm oil. The infusion of a small amount of oil of another type does not appear to impair the coconut flavour of the fries.

Frying is done with moderate heat which generates vigorous bubbling as the moisture in the coconut is converted into water vapour which escapes. Depending on the size of the batch deep frying takes 30 to 60 minutes.

Once most of the moisture has been driven off the oil temperature begins to rise, causing some colour to develop on the surface of the coconut strips. Frying should be stopped when most of the strips of coconut show some colour ranging from gold to brown. 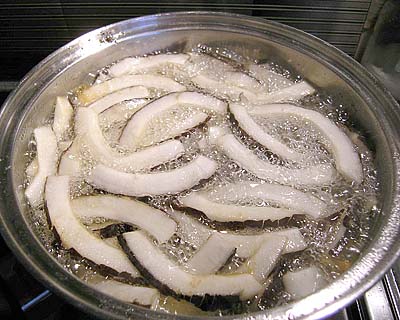 The oil is poured off at this point and the coconut left in a strainer or other container to “drain”. Remarkably, the surface of the strips develops a dry appearance and feel after an hour or two as it seems that any oil on the surface is absorbed into the matrix. It appears that the freezing has “loosened up” the fibres somewhat allowing internal water to more readily boil off and later allowing surface oil to be drawn in. 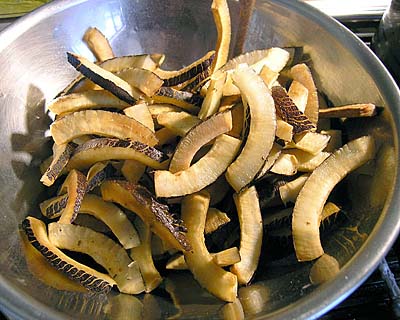 The Cocos Fries are packed in a paper bag to enable further air drying to take place. In a sealed container some moisture from within the strips makes its way to the surface and may support colonisation by microbes. The paper bag will absorb traces of oil from the Fries.

If more adventurous flavours than pure coconut are required that would be just a matter of adding a chosen spice to the frying oil.

From the consumer’s point of view the Fries are very tasty, possessing a mixture of genuine coconut flavour with an overtone of the caramelisation that generates the golden-brown colour.

While warm, immediately after cooking, the texture of the Fries is remarkably soft, but when cool (and especially when cold) they are quite “chewy”.

As the water content is close to 5% the oil content would be around 60%, so that the fries may be regarded as a concentrated source of coconut oil.

For those who have access to fresh coconuts, generating one’s own supply of this product provides a ready source of dietary coconut oil which has a convenient shelf life even without refrigeration, of many weeks. (If the strips are not pre-frozen, however, the shelf life is only a few days as it appears that thorough drying is very hard to achieve without the texture changes provided by freezing).

Cocos Fries may well provide an alternative, in terms of enjoyment of the flavour, to other nut types that are served at parties and entertainment events where snacks are provided. The health advantage might also be pursued to promote this use.

Sorry, there are no reviews for this product yet.

Hand-made by small coastal villages in the pristine Solomon Islands, our Coconut Bowls come from reclaimed coconut shells after their flesh is pressed into our extra virgin coconut oil. Nothing...
$12.95
Buy Now

Hand-made by small coastal villages in the pristine Solomon Islands, our Coconut Bowls come from reclaimed coconut shells after their flesh is pressed into our extra virgin coconut oil...
$12.95
Buy Now

The ultimate gift for the carb conscious. Whether you follow a fully ketogenic diet or just cutting back on carbs, our coconut keto pack is for you. Pack includes: 350ml jar of Niulife Extra...
$52.60
Buy Now